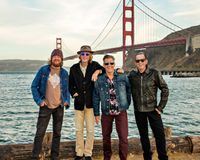 “The hardest thing to do,” says internationally beloved soul-blues rocker Tommy Castro, “is be yourself, take some chances and bring your fans along with you.” Throughout his long, constantly evolving career, guitarist, singer and songwriter Tommy Castro has always remained true to himself while exploring, growing and creating new music, and he has taken his thousands of devoted fans right along with him.