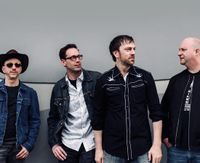 For more than a dozen years, Massy Ferguson have proudly planted their boots on both sides of the country-rock divide, carving out their own brand of amplifed Americana along the way. Based in Seattle, they've become international torchbearers of a sound that's distinctly American, with a touring history that spans nine different countries. On their fifth album, Great Divides, they double down on their rock & roll roots, mixing bar-band twang with raw, guitar-driven bang. Gluing those sounds together is the songwriting partnership of bass-playing frontman Ethan Anderson and guitarist Adam Monda, whose songs spin stories of small-town adolescence, big-city adulthood, and the long miles of highway that stretch between.