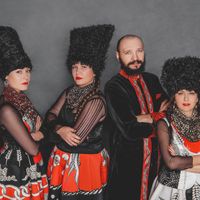 The name DakhaBrakha is original, outstanding and authentic at the same time. It means “give/take” in the old Ukrainian language. Accompanied by Indian, Arabic, African, Russian and Australian traditional instrumentation, the quartet’s astonishingly powerful and uncompromising vocal range creates a trans-national sound rooted in Ukrainian culture.

Live Soundtrack for “Earth”: In addition to their own performances, DakhaBrakha also performs their original live soundtrack alongside a screening of the classic 1930 film, “Earth”, by Aleksandr Dovzhenko (considered to be one of the most important films of the Soviet era). Dovzhenko is a master of composition, and the film—with its intense close-ups and the impressive expanses of the landscape—is a passionate tribute to the countryside, to nature, and to the people that work on it.